One of the main ways that researchers use our did package is to plot event studies. These are quite useful in order to think about (i) dynamic effects of participating in the treatment and (ii) to “pre-test” the parallel trends assumption.

You can find an extended discussion about event studies, limitations of event study regressions in a number of relevant cases, etc. here.

This post isn’t about criticizing event study regressions; instead, what I want to talk about is the choice of the “base period” in event studies.

Types of Base Periods

Event study regressions typically have a universal base period. This means that all differences are relative to a particular period, and, most commonly, it is set to be the period immediately before the treatment starts.

In the newest version (version 2.1) of did, we have added a new argument, base_period, to att_gt to give users the option to choose either a varying (the default) or universal base period.

A couple of other things that are also worth mentioning:

Finally, although using a universal based period is relatively more common in applications, it seems to me that this is mainly because it is easier to implement this when you are running an event study regression. For researchers that are directly computing averages of paths of outcomes at different lengths of exposure to the treatment (as we do in the did package), reporting the results in using either type of base period is easy to do.

Example 1: No violations of parallel trends

Let’s start with the simplest case where there are no violations of parallel trends in pre-treatment periods.

Below is some code to generate data where parallel trends holds in all periods, and the average effect of participating in the treatment is equal to 1 (reset.sim and build_sim_dataset are functions in the did package for generating simulated data). 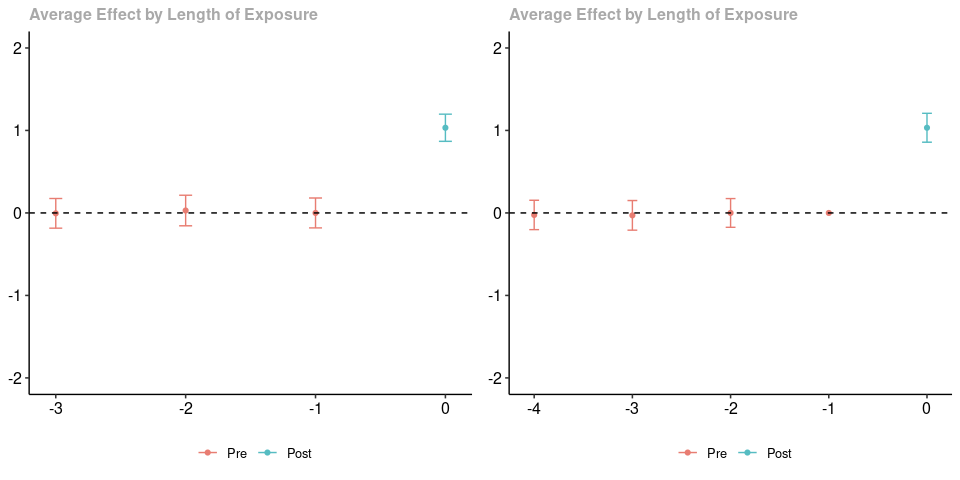 Next, we generate data where there anticipation effects. What is happening here is that there is a group that becomes treated in the last period and a group that never participates in the treatment (in order to not clutter the post with code, let me just point you to the complete code for this post…it is very similar to the code above). Parallel trends holds in all periods except the period right before treatment when the treated group experiences a negative “anticipation” effect of participating in the treatment. 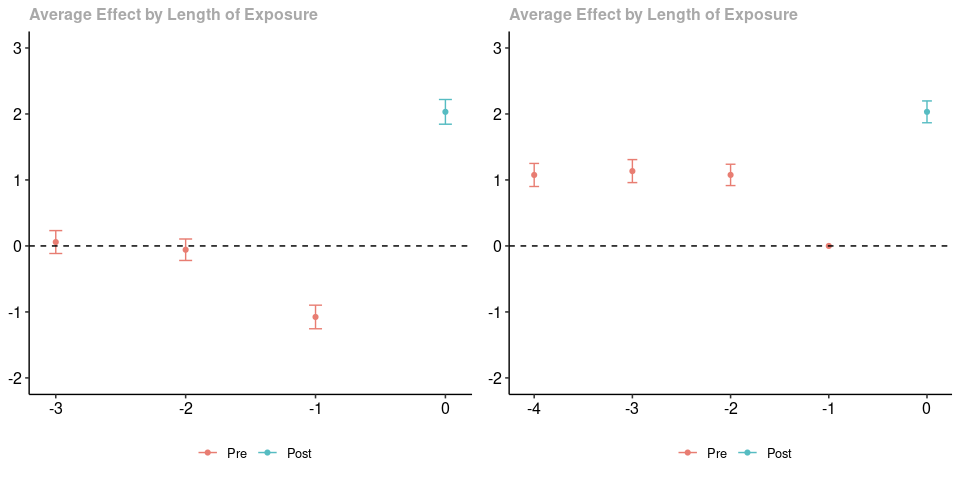 As before, the results using a varying base period are in the panel on the left, and the results using a universal base period are on the right. As before, the post-treatment estimated effects are exactly the same. To me, it seems much clearer to interpret the figure on the left (recall that there are anticipation effects that are equal to -1 in the pre-treatment period). For me, the figure on the right is hard to interpret. 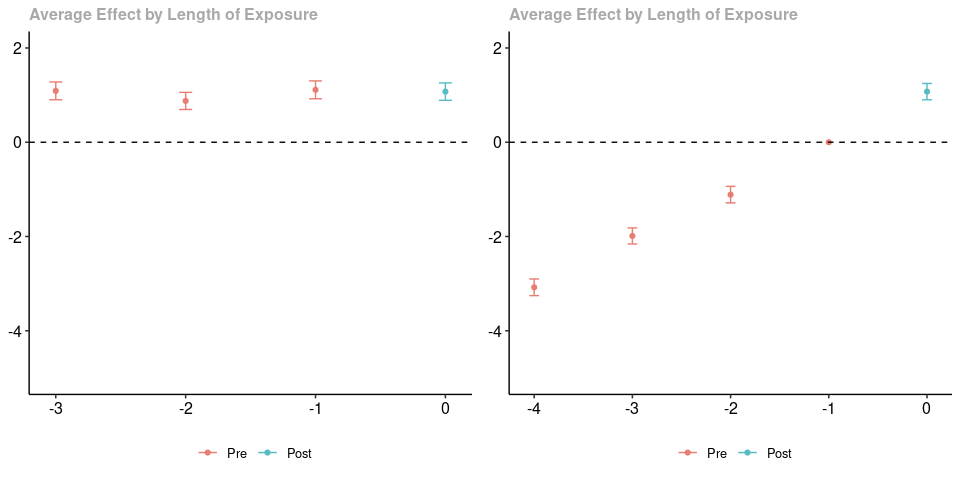 As in the earlier two cases, the panel on the left contains results using a varying base period, and the panel on the right contains results using a universal base period; likewise, the post-treatment estimates are numerically identical. In this case, to me, it seems easier to notice the linear difference in trends in the right panel. If you are careful, you can still interpret the results using a varying base period. Particularly, in every pre-treatment period, we would have over-estimated the effect of participating in the treatment (if the treatment had started in that period) – this happens because of the linear violations of parallel trends in all periods.